It has been reported that Swansea City had scouts in the stands on Sunday for Fiorentina’s 1-1 draw with AC Milan. 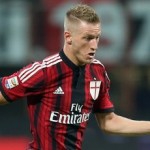 TMW revealed that the Swans scout was primarily in attendance to check on Fiorentina goalkeeper Norberto Neto.

The Brazilian is in new contract talks with Fiorentina, as his current deal expires in June.

AC Milan fullback Ignazio Abate has also been linked with a move to the Premier League this season and featured on Sunday.