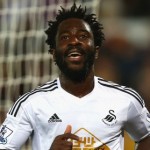 The 25 year old will soon be thinking about next month’s African Cup of Nations qualifier against Ebola-ravaged Sierra Leone.

The game is set to be played in a neutral – and Ebola-free – country and Bony said: “It’s important for us to play in a safe country.

“Of course, the situation is a worry for everybody, because you don’t want to get sick.”

I Am Still Learning – Wilfried Bony