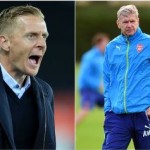 Garry Monk on striker Wilfried Bony extending his contract until 2018: “Hopefully it will be agreed before the weekend and done before the game. That would be nice, but you’ve got to go through the legal procedures to check everything’s in place. I’ve had a great relationship with Wilfried and spoke to him a lot in the summer, I know how committed he is as a person and as a professional. He enjoys his time at Swansea and this contract is a symbol of how much he enjoys being here and how committed he is to the club. It’s a big signing for the club and the player himself but also for his team-mates, and hopefully it will be a big boost to everyone.”

Arsene Wenger is unconcerned by fit-again forward Theo Walcott’s immediate recall into the England fold: “Roy Hodgson is free to do what he wants. (Walcott) has been chosen by England and he needs competition. He has been out for 10 months – I don’t know if you realise how long that is. People think it’s like mechanics. They’re not machines, they are human beings and to get back into the rhythm of the top, top competition will take time. He has had a cruciate injury from an accidental tackle against tackle in January and you can never plan that – it could never happen again. That is for sure in our job – every time you have a big injury, there is a bigger chance of having another. Overall he has been taken care of very well. He is now ready to play again and we have to just leave him in peace and give him the needed time to come back.” Ex-Arsenal, Man City Striker In Search Of A New Club