Reports are out claiming that Swansea City manager Garry Monk has made it clear that the club will not be recalling Michu from his loan at Napoli. 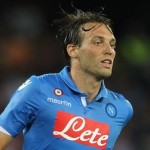 The 28-year old Spanish forward is on a season-long loan in Italy but will remain in Naples for the rest of the campaign despite the fact that the Swans will be without Wilfried Bony for some time.

The Ivory Coast international will miss as many six Premier League games in January and February while he is way at the 2015 African Cup of Nations but Monk says that is no reason to bring Michu back to the Liberty Stadium.

“Michu is on loan at Napoli for the season,” Monk said. “I’m not even thinking about that, I’ve not even checked the details of the loan.

“Obviously Ivory Coast’s qualification dictates what you do in terms of January.

“We may have to go into the loan market or do something to cover it.

“We’ve already been looking at all the positions but now Bony has qualified a striker is the position we do now have to cover.

“We could promote from within, but it is likely to be a loan. It might be a loan with a view to a permanent or to next season, or just for a month.

“We don’t know but we will look at all the options.”

Since arriving at Napoli, Michu has made just five appearances under Rafael Benitez, failing to score a goal.