It has been reported that Swansea City defender Kyle Bartley faces six weeks out. 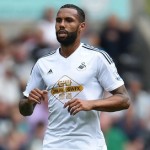 Bartley has been ruled out after tearing the meniscus in his knee.

The former Arsenal defender will undergo surgery on his knee later today.

Meanwhile, winger Marvin Emnes is training again following the hamstring injury he picked up at Southampton on February 1.