It has been reported that Swansea City are delighted to see the transfer deadline fall with Wilfried Bony still on the books. 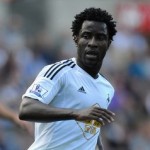 Moves to Tottenham, Arsenal, Liverpool, Wolfsburg and Roma were all mooted but none were prepared to meet a £20m release clause in his contract.

Swans boss Garry Monk was confident of keeping Bony at the Liberty Stadium and the player’s agent, Dalibor Lacina, said: “Wilfried is happy to stay in Swansea.

“The club have acted properly and professionally towards him and he is looking forward to improving on last season.”