It has been revealed that Arsene Wenger must double his original bid for Ashley Williams to convince Swansea City to sell. 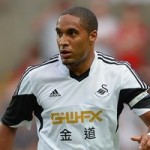 It is said that the Arsenal boss wants the Wales international centre back, but has only offered £6million so far as what was billed as a summer of spending by the Gunners has failed to take off.

And the angry League Cup winners are demanding £12m for Williams – although chairman Huw Jenkins would still prefer to keep him in west Wales, says the Mirror.