Swansea Fullback Neil Taylor Delighted To Be Linked With Arsenal 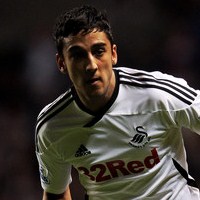 The 22 year old left-back, who was wanted by Newcastle United in the summer before signing a new four-year contract, is aware of the speculation and has been boosted by rumours he is wanted by the Gunners.

“I’m flattered by the interest from Arsenal,” said the 22-year-old in the Daily Star.

“I’m enjoying my football at Swansea but it’s a great thing to hear.”