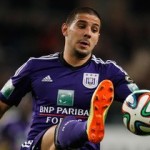 Reports are out claiming that Swansea City are chasing Anderlecht striker Aleksandar Mitrovic.

The Daily Mail reported that Swansea are attempting to sign Mitrovic with the money they get for Wilfried Bony.

Anderlecht want £15million for the 20-year-old who has impressed in the Champions League against Arsenal.

Newcastle United and Leicester City have already been rebuffed in initial attempts to sign the Serbia international as the player has designs on playing for another Champions League side.