Swansea City manager Garry Monk has declared that the Welsh club have no intentions of selling Michu. 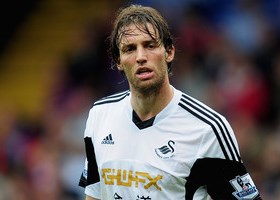 The 27 year old Spanish international has emerged as a transfer target for Russian club Anzhi Makhachkala who have been linked with a big-money bid before their winter transfer window closes at the end of the month.

The former Rayo Vallecano forward has been sidelined since December 15 with an ankle injury, which required surgery, but Swans interim boss Monk says he will not be going anywhere anytime soon as he nears full fitness.

“Michu is the type of player who will attract interest and he is a good player,” said Monk.

“He needs to get himself fit and that’s got to be his first priority.

“We’re not a selling club and players who have been sold, it has been for the right price.

“We’ve had no offers and Michu should concentrate on getting back on that pitch for us. He’s a big part of our plans going forward.”

The versatile attacker has made just 12 appearances for two goals this season after netting 18 times in 35 matches in 2012/13 – his debut season in English football. Douglas Maicon Linked With A Move To Anzhi Makhachkala

Michu On The Brink Of Swansea Return