Reports are out claiming that Swansea City are reportedly showing significant interest in Anderlecht’s Aleksandar Mitrovic. 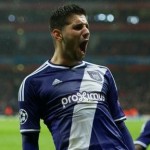 ?The Mirror suggests that the Swans have joined Liverpool in the race to sign the 20-year old Serbian.

?Garry Monk has just Bafetimbi Gomis and Nelson Oliveira up front at the Liberty Stadium and is looking to strengthen his attacking options in the summer.

?Of the interest, Mitrovic said: “The Premier League? That’s not just a dream, I would love to play there.

?“Swansea are a solid team in the Premier League but for me the most important thing that I can play and get better.”?

Brendan Rodgers Pleased With The Progress Of Jordan Henderson