Reports are out claiming that Swansea City centre-back Jordi Amat says Arsenal’s slide is due to a lack of defensive focus. 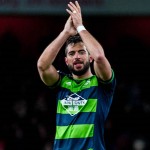 The Swans beat Arsenal 2-1 at the Emirates last week to cause a huge upset and leave their title hopes hanging by a thread.

Amat said: “A lot of times, they send four or five players forward when they attack, and that’s when our moment comes. They only have Coquelin in midfield, and if we get the ball back, that’s when our opportunity starts.

“Our first goal was like that. The front four didn’t drop back, I got the ball back from Ozil, my teammate [Jack] Cork took it, passed it into space, and we scored.”

Arsenal Not Interested In Selling Cesc Fabregas For A Knockdown Price