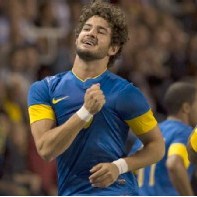 A first-half header from Damiao and a late brace from Alexandre Pato earned Olympic silver medallists Brazil a deserved friendly win over Sweden at Rasunda tonight.

Just four days after their London final defeat to Mexico, the South Americans were back in action and back in the swing of things, restricting their hosts to precious little opportunities on their way to a comfortable win in a game which was celebrating the life of Brazilian great Garrincha, who spent time playing Sweden.

Although it took until Pato’s 84th-minute first to secure the victory, they had been in control ever since Internacional striker Damiao ghosted into the box unmarked with 32 minutes on the clock to glance home and give his side a lead they would never surrender.

That Pato then added a third from the spot only served to add a more fitting look to the scoreline.