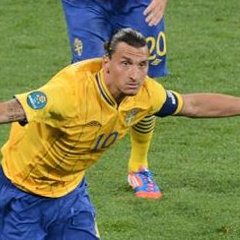 Zlatan Ibrahimovic scored one of the goals of Euro 2012 to give Sweden a polished 2-0 Group D win over France in Kiev and condemn Laurent Blanc’s side to a daunting quarter-final with world and European champions Spain.

With England overcoming Ukraine 1-0 in Donetsk, the French needed to match that scoreline to win Group D but failed miserably as Sweden – despite already being eliminated having lost their first two games – were by far the better side at the Olympic Stadium.

AC Milan forward Ibrahimovic set them on the road to three points when he swivelled to smash a volley low into the corner of the net from just inside the opposition area to earn Sweden the lead from Sebastian Larsson’s cross on 54 minutes.

It was a special finish from the towering forward in a commendable team effort by Sweden, an asset that seemed to seep from the French side on such an important evening.