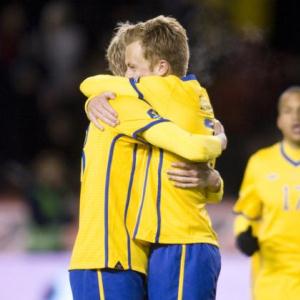 Sweden held off a spirited performance from Moldova to claim victory in their Euro 2012 qualifier in Solna.

Mikael Lustig gave the Scandinavians a 30th-minute lead, but they were never comfortable until Sebastian Larsson scored his first international goal eight minutes from time.

Skipper Zlatan Ibrahimovic set up the Birmingham midfielder to help make up for his first-half penalty miss, and the strike proved important after Alexandr Suvorov fired in a deserved goal for the visitors in stoppage time.

Victory for Sweden moved them level on nine points with second-placed Hungary, who meet Group E leaders Holland in Amsterdam.