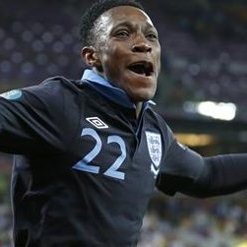 England need a draw against co-hosts Ukraine in their final Group D match to reach the Euro 2012 quarter-finals after Danny Welbeck scored a late winner in a 3-2 victory over Sweden at Kiev’s Olympic Stadium.

In a match in which neither side’s defence impressed, England were forced to recover from trailing in the second half after Olof Mellberg forced Glen Johnson to put past his own keeper and then scored himself to cancel out Andy Carroll’s headed opening goal for England on 23 minutes.

Substitute Theo Walcott brought England level when he drove a shot straight down the middle of the goal on 64 minutes from outside of the area that somehow evaded Swedish goalkeeper Andreas Isaksson as he dived to his left. It was his first international goal since his hat-trick in a 4-1 win in Croatia almost four years ago.

Welbeck won it for England on 78 minutes with both sides pushing for the three points when he backheeled Walcott’s cross into the net with the opposing defenders again caught marking fresh air.