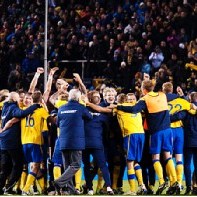 Sweden booked their place at Euro 2012 after two goals in a minute early in the second period secured victory over Holland on a famous night at the Rasunda Stadium.

The Dutch had already booked their ticket to next summer’s showpiece as Group E winners prior to tonight’s fixtures, but for Sweden the picture was less clear cut.

Erik Hamren’s side were already assured of second place and a play-off spot, but needed a win tonight to seal the final automatic place awarded to the best runner-up across the nine qualifying groups.