Reports are out claiming that Everton defender Sylvain Distin has hailed the form of teammate Romelu Lukaku. 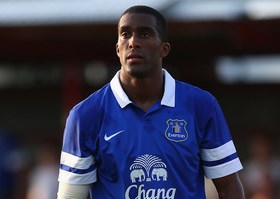 The on-loan Chelsea striker struck his fifth goal in as many league games to kickstart Saturday’s 2-0 win at Aston Villa.

The 35 year old told evertonfc.com: “Considering Romelu’s age he has got all the qualities.

“He’s a monster. He’s learning game after game and has the right mentality.

“I was talking about his size and his weight with him a week ago. We’re more or less the same weight and to get there I had to work hard in the gym for four years.

“For him it’s just how he is when he wakes up. I wasn’t like that when I was 20. He’s physically blessed and his positioning on the pitch and finishing are improving all the time.

“His attitude is great and that’s the most important thing for a young player, and all our youngsters have that.”