It has been reported that Barcelona coach Tata Martino has dismissed retirement rumours for skipper Carles Puyol. 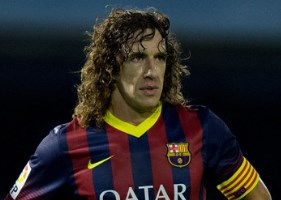 It was claimed over the weekend that the 35 year old Spanish international is considering hanging up the boots.

“The only thing I can say is that he hasn’t talked about it at all with me. I see him training normally and he always demands the most from himself. He’s never said anything like that, so I don’t see that there is any need to come out and deny it,” said Martino.