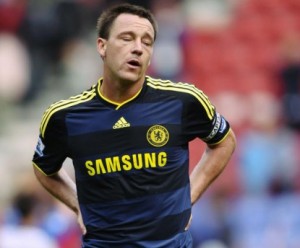 John Terry will be leading his team out against Liverpool at Stamford Bridge tomorrow desperate to get the Blues back to their best after last week’s shock 3-1 defeat at Wigan.

Terry told reporters that seeing Manchester United lift the trophy for the last three years has torn him up inside.

Terry said that the players at Chelsea are winners and that they hated seeing Manchester United lifting the trophy.