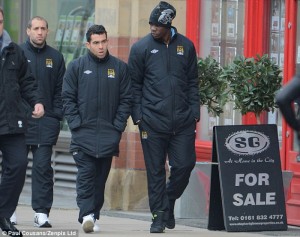 Carlos Tevez who himself is no stranger to mutiny is said to be offering advice to current mutineer Mario Balotelli.

When Tevez embarked on his three-month ‘strike’ in his native Argentina after falling out with Roberto Mancini, it seemed there was no way back for the striker at City.

But a mixture of contrition, application and the hard currency of goals has seen him regain the faith and trust of City fans – a ­challenge facing Balotelli following his training-ground spat with Mancini.

And Tevez, who set City on their way to a ­comfortable win over Watford with a fierce first-half free-kick, said he wanted to help Balotelli avoid making the same mistakes as him.

“I try to help Mario,” said the Argentine, whose one-man mutiny cost him around £10million in fines, docked wages and lost bonuses. “I talk to him on and off the pitch. I talked to him just before a free-kick we were about to take, and I let him take it so he could improve his confidence, so things can get better for him.

“I’ve been in that moment like him, so I’m always keen to help him and keep him going so he doesn’t make the same mistakes.”

“These kind of incidents have happened at all the clubs I’ve been.

“But here at City the spotlight is always on us, always on Roberto and Mario. So it always comes out, but this kind of thing happens ­everywhere. Mario has been doing okay. He has been working and trying to improve.

“That’s what he did coming back from illness and injury, and it’s what he’s been trying to do.”