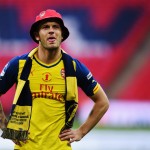 Reports are out claiming that Arsenal star Jack Wilshere admits winning the Premier League is the main goal for the club.

The Gunners took out a second-straight FA Cup title courtesy of a comfortable 4-0 win over Aston Villa on Saturday and even though it is a monumental result, Wilshere is gunning for the English top flight trophy.

“The big one for us is the Premier League. We’ve progressed this year, we’ve finished third and got automatic Champions League qualification,” he said.

“Next year we feel we can really push Chelsea, (Manchester) City and United for the title.

“The competition is ferocious and it’s going to be the same next season — it’s part of football.

“I remember coming away from games like United away thinking ‘We dominated that game’ but we never really got anything for it. So I think this year was a big thing.” Arsenal Youngsters Impressing On Loan At The Weekend