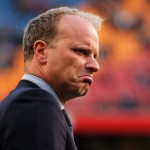 Reports are out claiming that Arsenal legend Dennis Bergkamp is being linked with a role at the FA.

The Mail on Sunday says the FA are now seeking a new ‘technical director’ following the decision of Sir Trevor Brooking to retire after the World Cup.

One candidate is former Arsenal striker Bergkamp, who is currently working with Ajax’s academy. Arsene Wenger : I Always Had The Board’s Backing!

Alex Oxlade-Chamberlain : Walcott Is Faster Than Me!