The Most Retarded Goal Celebration In Football History? – Video 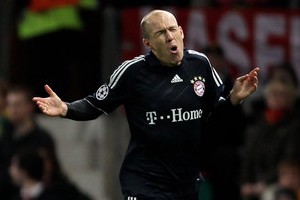 It was a goal worthy of winning any final. It is even said to be the goal of the competition.

Arjen Robben’s very own wonder volley for Bayern Munich in the Champions League effectively eliminated Manchester United from the competition, was a strike worthy of winning a final.

But what about Arjen Robben’s celebration right after he scored the goal?

It appeared as though Robben was in pure shock and did not know what to do. He then ran off to celebrate but it looked as though he had too many celebration tricks on his mind and did it all at once.

One part of the celebration he reacted as though Gary Neville was about to throw a bucket of urine at him (see 0:13 of video below).

Right after that he tried the Michael Jackson hand movement. (WHAT WAS HE THINKING !!)

We at TFM therefore declare that Arjen Robben’s goal celebration against Manchester United is “The Most Retarded Football Celebration In Football History”. It was a great goal nonetheless.