It has been reported that the police are facing a sizeable £50,000 bill for arresting the wrong Manchester United fan ahead of the FA Cup semi final back in 2011. 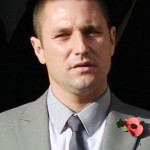 Alan Taylor, 51, was taken into custody ahead of Manchester United’s FA Cup clash against Manchester City in 2011 after the police wrongly believed that the father-of-four was attempting to interfere with the arrest of another fan.

Taylor was only released from the Wembley Police Station at 2am the following morning but the 51-year old maintained that he was only trying to help out a friend.

“I lifted him, turned him and pushed him in the direction we were supposed to be going to get to our turnstiles,” Mr Taylor said.

“As I was about to follow, I was grabbed from behind and pushed against the stadium wall. That’s when I was arrested.”

Taylor was later cleared of any wrongdoing and four years on from the event, the police now face fees of up to £50,000 after a jury found that he had been assaulted and imprisoned wrongly.

Taylor is still upset about the incident but has stated that he has been vindicated: “It’s not about the money; the main thing is I was completely vindicated.

“The worst thing was that my friends and family knew I had been arrested. My kids saw me go to the football every week, and then one night I didn’t come home.” Marouane Fellaini Happy To Be Back In Action For Man Utd