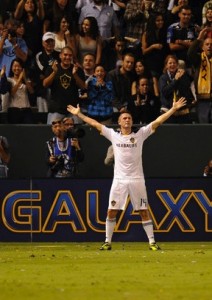 Robbie Keane has recently had a successful move to LA Galaxy. This signing marks the next step in a great career in professional football. He began this career with the Wolverhampton Wanderers, debuting at the age of 17. In his first game playing with this team, Keane scored twice, setting a high standard by which to continue.

Impressively, he was able to only improve upon his brilliant skills, becoming the team’s leading goal-scorer the following season. Fans became hooked, and even now, if a game including him comes on the television, all attentions reverts to this, away from things like playing Party Poker , or cooking dinner. This is because he has only improved up to now, and is only set to continue along these lines in the future.

After many transfers, Keane joined Tottenham Hotspur in the year 2002, remaining in his place here for six years. With this team, Keane had his best year ever in the season of 2007 to 2008. During this time, he set a career record, scoring 23 goals in one season, as well as his 100th goal for Tottenham. He gained the League Cup, a senior honour before moving to Liverpool. Keane only spent six months here however, and soon moved back to his old club of Tottenham where he was made team captain.

2010 marked the year when Keane was loaned to Celtic, in the Scottish Premier League. He ended the season here. All the while, he also played for Ireland, scoring a record number of goals in 2004 and becoming the captain of the national team in 2006.

Up to the present, Kean has now moved to the United Stated, where he plays for LA Galaxy. True to form in his first game for this team, he scored a goal in the 21st minute, securing his place as a top goal-scorer in the world of professional football.