In terms of an overall gaming genre, football games have to be up there with the very best of them. They’re action-packed, fun and entertaining, and they enable diehard fans to execute skills and score screamers with players like Cristiano Ronaldo and take their beloved clubs up through the leagues. Put simply; football games are understandably in demand.

Over the years, fans of the beautiful game have been treated to an array of memorable football gaming releases, from the likes of classic titles such as Sensible Soccer to modern-day releases such as FIFA. As an all-around genre, football games have certainly captivated audiences and continue to do so to this day. In fact, these days, thanks to the powerful mobile phones we all have access to, an array of solid products in the football gaming space are now available to sample on a miniature handheld device. Let’s take a look at some of the very best options below.

Arguably the best football game of them all is now available to play on mobile, although it’s perhaps not as polished as the console version. Still, that shouldn’t put you off what is very much still a fantastic title to tuck into on a smartphone device. With its community of players worldwide and opportunities to play in career mode or tackle Ultimate Team, it’s a creation that will keep you entertained for months as you aim to assemble your dream squad. You can even battle it out in multiplayer mode against your friends, too.

Recently released on both iOS and Android, Football Manager 2022 Mobile offers fans a portable version of one of the most in-depth football management games ever created. You sign the players, pick the team, build a rapport with the fans, scout for gems, and do everything else football management entails. Just like in the real world, too, though, should you fail, then you could face the chop. You’ll certainly struggle to find a better football management game out there.

Initially developed by Playtech back in 2007, Football Rules has been updated for both mobile gameplay and a modern-day audience. A 25 payline game featuring symbols such as the referee, the goalie and the ball, the Football Rules video slot machine offers plenty of excitement in what is a football-themed casino title which gives fans the opportunity to win a £50,000 jackpot. With easy sign-up options and an overall solid gaming experience, Football Rules is a great game to session. 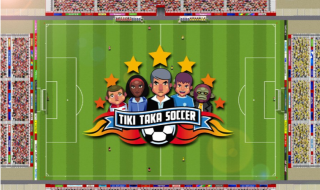 It might be dead in the modern world but tiki take is still very much alive in the virtual climate, with Tiki Taka Soccer getting the nostalgic juices flowing thanks to its availability on a mobile phone. Based on the memorable Spanish style of play which Pep Guardiola’s Barcelona used so effectively, the game champions short and sharp passing and movements as players are tasked with scoring the ultimate team goal.

Similar in some aspects to Football Manager, although not as detailed and giving players the chance to play as a Chairman of a football club instead of a manager, Football Chairman Pro is part of the football management sub-genre as it challenges fans to experience the day-to-day life of a football chairman and make vital calls around things such as club transfers, manager recruitment, and even the option of designing a new stadium.