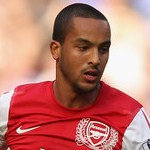 Theo Walcott has admitted that Arsenal’s attack is brimming with confidence after victory over Chelsea.

The England international winger was outstanding in the 5-3 win at Stamford Bridge.

Walcott said: “We are not looking too far ahead. We don’t want to say where we’re going to finish at the end of the season, but the way we’re playing at this moment in time we believe we can beat anyone.

“We’re enjoying our football, our run is great now and we’re just going to keep on continuing that… everyone is buzzing at the moment.

“We were disappointed to go 2-1 down just before half-time, but before that we were playing some great football.

“It seemed that every time we went forward it looked like we were going to score and it could have been 8-7. It was just one of those crazy games that I’ll never forget.”