It has been reported that injured Arsenal winger Theo Walcott is backing Liverpool youngster Raheem Sterling for a big World Cup with England. 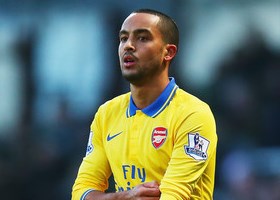 The Arsenal forward will miss this summer’s World Cup with cruciate ligament damage, and he thinks the young Liverpool star has got all the tools to succeed in Brazil.

Walcott said: “The manager has some great young players to pick from. Raheem has had a great season and been very consistent.

“Luis Suarez and Daniel Sturridge have helped his game too.

“He has assists, he tracks back and works really hard for the team. He has a great opportunity. Then there’s Ross Barkley, Andros Townsend and Alex Oxlade-Chamberlain too.”

Wenger : Thierry Henry Has Not Lost His Class Or Brain!