Arsenal boss Arsene Wenger has declared that Theo Walcott is less than a month away from a playing return. 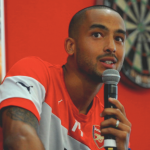 The England international winger will be absent for the Gunners opener and despite insisting the 25-year-old is on track to return to full training at the end of the month, Wenger risked aggravating England manager Roy Hodgson by suggesting he would not be available for the international friendly against Norway on September 3.

“Look, Theo Walcott is planned to come back into my group on 31st August, beginning of September at the latest,” he said.

“He is doing well but he is not completely ready. I would say he could play at the end of August. But to play an international match, that could be a bit early.”