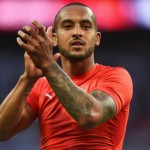 Reports are out claiming that Arsenal attacker Theo Walcott is convinced they can now match any team in the country.

The Gunners are on a nine-game unbeaten run which has lifted them to third in the table, level on points with second-placed Manchester City although they remain 10 points behind leaders Chelsea.

The England international said, “There’s a lot of competition for places so everyone seems to lift a gear and play extremely well.

“It makes it a bit more difficult for people to get into the team. I think, especially this season, not many people thought we’d be second and challenging for the Premier League.

“In this calendar year, we’ve been the best team in Europe. It’s the strongest the squad has been and everyone is staying fit as well.

“There aren’t many injuries in the squad, which is important. If we had an injury-free season, I think we could lift the title.”