Reports are out claiming that Theo Walcott is determined to win more silverware at Arsenal following the 2014 FA Cup triumph. 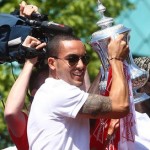 The Gunners have secured manager Arsene Wenger to a brand new three-year deal which has delighted Walcott who wants to repay the faith shown in him by the Frenchman.

Thee England international told ITV : “I’m very pleased, Arsene was one of the main instigators of me joining Arsenal,”.

“He’s tasted success and just wants more and more of it. He’s always said this is the best squad he’s worked with but I think we have underachieved.

“So we need to push on from a great season last year and make it even better.”