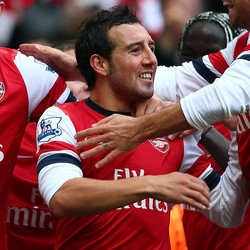 Theo Walcott has admitted that Santi Cazorla is key to any success this season.

The Arsenal midfielder was again impressive in victory over Tottenham.

Walcott said: “He’s on top of the world at the moment.

“His first season in the Premier League, he’s an absolute dream to play with.

“I’m on the pitch now with him and the stuff he does is absolutely fantastic to watch.

“I don’t know what foot he’s best at. He’s supplying goals. He just sort of slows the game down when needed.

“You’ve got him and Jack in the middle and that’s definitely going to help our game.”