Theo Walcott has declared that it is an honour to play alongside Aaron Ramsey in his current form. 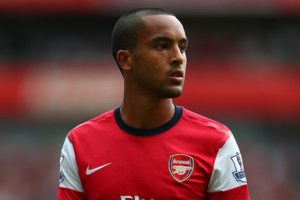 Arsenal boss Arsene Wenger insists that the Wales international is the most in-form midfielder in Europe.

“It always takes time when you have injuries,” said Walcott.

“He had one of the worst injuries around in football. He’s had a hard pre-season, he’s worked really hard and it’s definitely paying off now.

“He’s enjoying his football and it’s going to be difficult to get him off the football pitch, I’m pretty sure of that. He loves touching the ball and he’s got something different to his game now which is goals.

“People would say they would criticise that side of it [in the past] but I see him in training every day and he’s looking a totally different player. He’s like a new signing. It’s an absolute honour to play with him at the moment.”