Reports are out claiming that Arsenal attacker Theo Walcott insists they can beat Champions League opponents Bayern Munich this week. 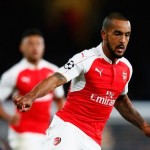 The Gunners go into the game on the back of a 3-0 win at Watford.

Walcott said: “Playing against Bayern and their quality is of course going to be a challenge for us, but we are at home with our support and we need a similar sort of performance like we had against Manchester United.

“We know we can beat anyone and we’re going to be completely ready for this one.

“We need to move on from the first couple of results in the Champions League. We know we are capable of getting results against Bayern and we want to put things right.

“Looking at our last Premier League home match against United, the intensity of our game was different to what it was like against Olympiakos in the Champions League.

“We want put it right and we just need to work hard – that is what it comes down to. If everyone is doing their job on the day it is difficult to beat us.” Arsenal, Liverpool To Do Battle For Olympiakos Striker Konstantinos Mitroglou