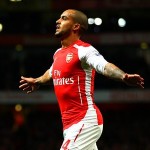 The two teams face off today.

Walcott told BT Sport: “I’m expecting very similar to the Leicester game – they’ve been doing very well in the Championship. They’ve got a good balance between the way they attack and defend. They beat Manchester City away from home, they’re going to be a good team, so you can’t take anything for granted.

“It’s the FA Cup, there’s always several shocks so we need to completely ready. The last game or two we haven’t started particularly well so we’re going to have to be completely ready because Middlesbrough are challenging to be in the Premier League next year. They are a big club, so we need to not take that for granted.” Mathieu Debuchy Admits He May Have To Quit Arsenal