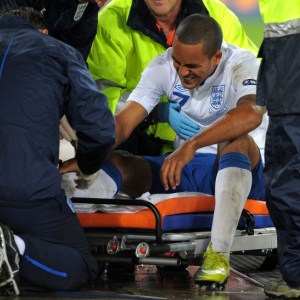 In-form winger Theo Walcott has handed Arsenal a major injury blow with the news that he is set to miss at least two weeks of Premier League action.

Arsene Wenger’s Gunners are already dealing with the fact that Danish striker Nicklas Bendtner and Dutch ace Robin van Persie will be sidelined for at least a month and now they have to deal with Walcott being out of action.

The 21-year old, who has scored four goals in the Premier League so far, injured his ankle whilst playing for England against Switzerland and told national team boss Fabio Capello that he is likely to be out for a couple of weeks.

“I just spoke with Theo. He tells me it’s not such a big problem. I said: ‘Two weeks?’ He told me less,” Capello said.