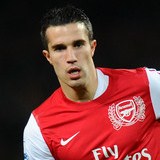 Theo Walcott has admitted that it is a thrill to see Robin van Persie fit and scoring at will.

The pair have spent a fair bit of time together in the Gunners’ medical room over the past few years but the Dutchman has been able to string a lot of games together to net 26 goals in the league and 33 times in 38 matches in all competitions this season.

The England international winger is delighted to be playing alongside van Persie after it looked as though the Arsenal captain may miss a lot of football throughout his career.

“When I was on the treatment bed alongside him in previous years it was such a shame to see so much talent wasted,” he said.

“He has made up for lost time, I am sure of that.

“You just give him anything and he will put it away – left foot, right foot and he has scored a couple of headers as well.

“He makes it look easy and it’s really not.

“Wayne Rooney is still several goals behind him and has had a fantastic season as well. It just shows you how good this man is.”