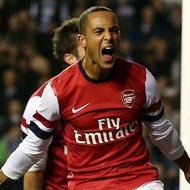 Reports are out claiming that Arsene Wenger is ready to deploy Theo Walcott as a striker against Manchester United this Saturday.

The 23 year old England international winger scored a hat-trick and boss Arsene Wenger says he can play as a striker, a sticking point in contract negotiations, but a berth up front at United seems too soon.

“I always said that he will be a striker, so we are on the same wavelength there,” Wenger told reporters.

“Secondly, I believe he knows where to be in the box on the rebounds. I like that – that’s a quality of a striker that you cannot give to anybody. You feel it or you don’t.”

Walcott has so far played a total of 231 matches for Arsenal scoring 49 goals along the way.