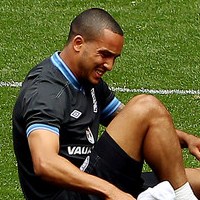 Reports have surfaced that Arsenal winger Theo Walcott has handed England an injury scare in training.

“We had to take the precaution of taking him from the field because he felt some tightness in the hamstring that kept him out for so long at the end of the season.

“Whether he is a real contender for a starting position will depend upon what the medical people can tell me and how much guarantee they can give me that if I do start him he won’t be leaving the field after five minutes.”

Hodgson confirmed it was “a major concern”.