Reports are out claiming that Theo Walcott insists he is not far away from returning to the pitch for Arsenal. 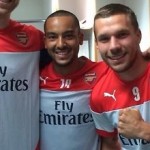 The England international winger has been sidelined since injuring his knee in a FA Cup victory over north London rivals Tottenham on January 4 but is stepping up his rehabilitation.

The 25 year old is not putting a date on his return but says his comeback is moving along well thanks very much to the Arsenal medical team.

“We’re not setting specific comeback matches, but I’m just pleased it’s hopefully now only a matter of weeks before I’ll be back playing,” he told Arsenal’s official website.

“There may be one or two under-21s matches I’ll be involved in first. I’m just looking forward to getting out there and playing again.

“Everyone has been so good with me – the Arsenal medical team, the Arsenal fans, and of course my family. Everyone has worked so hard and have been so supportive towards me. And now I’m coming to the end of my rehab, I just can’t thank everyone enough.”