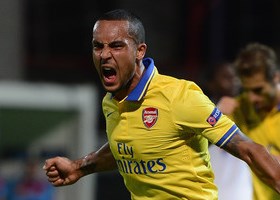 It has been reported that Theo Walcott is set to give Arsenal a boost ahead of their massive Premier League clash with Manchester United this weekend.

The Gunners head to Old Trafford on Sunday and could have the England international winger in tow after seven weeks on the sidelines.

Walcott has been out due to a stomach injury but is expected to step up his training during the week and could be right to go off the bench when first plays eighth in the 11th fixture of the 2013/14 Premier League season.