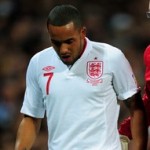 Theo Walcott has been ruled out of England’s World Cup double-header against San Marino and Montenegro with a groin strain, according to Press Association Sport.

Walcott suffered the injury in training on Thursday night and will fly back to England, where he will be assessed by his club Arsenal.

It is anticipated the winger will be sidelined for between seven and 10 days. It had been anticipated the 24-year-old would start Friday night’s encounter with San Marino. Instead, he will miss both that game, and Tuesday’s crucial trip to Montenegro.

Walcott could also miss Arsenal’s next game at home to Reading but will hope to return for the West Brom fixture on 6 April.

The Football Association has yet to comment on Walcott’s injury, although the manager Roy Hodgson is expected to do so prior to Friday’s game. Walcott’s Arsenal team-mate Alex Oxlade-Chamberlain is tipped to play instead.