It has been reported that England manager Roy Hodgson is confident that Theo Walcott will return from injury in a stronger position than he is now.

The 24 year old Arsenal winger sustained a ruptured cruciate ligament in the weekend’s FA Cup win over Tottenham which is expected to keep him sidelined for six months. 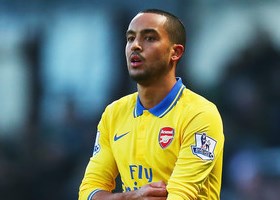 That amount of time spent out of the game will deny Walcott the chance to represent England at the 2014 World Cup but Hodgson believes he will be able to fully recover ahead of next season.

Hodgson told TheFA.com : “I just wanted to express my disappointment to him. It is a blow for him personally of course, and for both Arsenal and England,”.

“We had quite a lengthy conversation and it is such a shame that we have lost a player of his calibre for the World Cup, he has been incredibly unfortunate and we wish him a speedy recovery.

“Having worked with him for two years as England manager I know the character he has, and I know he will come back even stronger from this setback.”