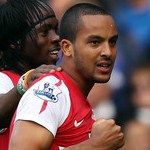 Arsenal winger Theo Walcott has spoken of his wonder strike in victory at Chelsea.

Walcott’s goal was arguably the best of the match.

With the score at 2-2, he picked himself up after slipping in a tackle and muscled his way past three Chelsea players before driving past Petr Cech.

“When you’re confident you think you can do anything,” Walcott said.

“I managed to lose my balance but get up quite quickly. If I hadn’t scored Aaron (Ramsey) would have killed me because he was free.

“It (scoring) is something I bring to the game and I also try fulfil my defensive duties. But it’s not just me, it’s the whole team – they were all great.”