It has been reported that Bayern Munich midfielder Thiago Alcantara has no regrets leaving Barcelona in the summer. 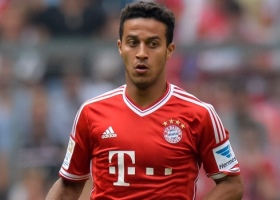 Despite struggling with injuries this season, the 22 year old has made 12 appearances in the Bundesliga and three in the UEFA Champions League.

The Spanish international told Kicker-Sportmagazin : “To join Bayern Munich was a brilliant decision,”.

“I had great years with Barcelona, but the transfer helped me a lot to mature into a better footballer and also to mature as a person.

“Everything is a perfect fit in every respect. Of course, it is difficult to win a first-team role (at Barcelona) due to the presence of Andres Iniesta and Xavi.

“They are great players. I have a lot of respect for them. But it was not about winning their place. It was about the whole thing.

“The people at Barcelona did not hand me the feeling they would fully believe in my qualities.”