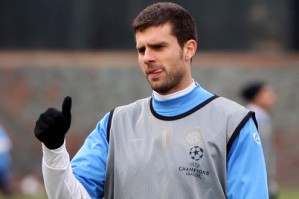 The Brazilian international told reporters that : “We are relaxed and here to play a good game,”.

“It is only normal that after losing at San Siro they must do everything to fire up the atmosphere, even if I think that faced with such an important match it would be better to keep comments civil.

“We won’t let ourselves be affected by that. We’ll do everything we can on the field to help the referee and ensure it is a fair encounter. If we play fair, it’ll be easier for the referee.

“We will therefore try to play cleanly. I watch Barcelona on television and see the players diving, but the important thing for us to do is step on to the field with a cool head and help the referee.

“I have respect for Barcelona and do not want to cause controversy. It’ll be a different game to the first leg, Barca are very strong and play good football, but the same is true of Inter.