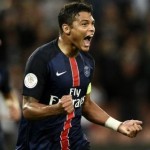 Martial left AS Monaco for United last week in a deal worth a fee rising to €80 million.

Thiago Silva told Gazzetta dello Sport : “The transfer market? It is on the edge of madness,”.

“I do not know if Anthony Martial is worth €80 million or less, but he really reminds me of Thierry Henry.

“He has his (Henry’s) technique, his physique, his reading of the game.”