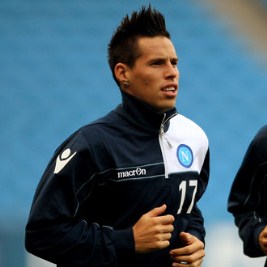 Interesting news are out and it has been revealed that Thiago Silva wants Napoli star Marek Hamsik to join him at AC Milan.

The Slovakian international was linked with the Rossoneri over the summer.

“It would be so much better if Hamsik were playing this game with a Rossoneri jersey,” smiled Thiago Silva in the Gazzetta dello Sport.

“He has incredible technique and class. I hope he can be my Milan teammate next season.”

That is, of course, assuming the Brazilian stays with his current club after new reports of interest from Barcelona.

“I personally did not say no to anybody, but that’s because I was never contacted. In any case, I consider it unfair to reject any option out of hand, as you never know what could happen in future. I did the same in Brazil.”

Pato : We Will Do Our Best Against Manchester United

Napoli Ready To Sign Pepe Reina On A Permanent Basis