It has been reported that Chelsea goalkeeper Thibaut Courtois is full of praise for Belgium teammate Marouane Fellaini. 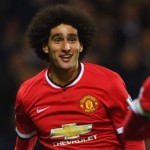 The Belgium international goalkeeper understands why Manchester United fans got on Fellaini’s back, but he has backed the former Everton man to win them over.

“It’s normal for some fans to act that way when someone costs a lot of money and is not playing well,” the Chelsea goalkeeper said.

“It’s easy to criticise them. That happens not just with him but other players.

“Obviously last season was not the easiest. The team was not doing very well and he’s not the kind of player to change the dynamic of the team, but he is an important player – he is very strong in the air when you play long balls to him.

“In the game against West Brom, he made an important goal for United and was very dangerous against us too.

“He is a good player and to have him with me in the Belgium team is very good.”